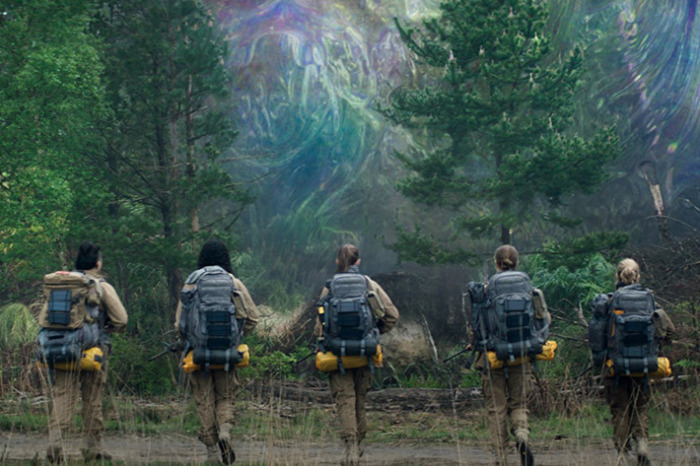 Annihilation is a hard movie to categorize; not because defies genre categories, but because it samples so many of them.  Like the strange creatures that inhabit its world, it’s a hybrid; blending together science-fiction, drama, and horror to potent effect.  The structure of its first-act setup is pure adventure, beginning with the return of Lena’s (Natalie Portman) husband Kane (Oscar Isaac) long after he went missing on a classified government mission.  It’s immediately clear that something is very wrong with him, both physically and mentally.  When Lena tries to get her husband to the hospital, the government swoops in and abducts them both to a secret location, where they isolate her and reveal what’s responsible for his condition.

One year ago, Kane and his team were sent into the shimmer, a miles-wide dome of energy enveloping an isolated town in the swamplands of (maybe) Florida, with Kane being the only person ever to return.  Lena, ex-military herself, demands to join the next expedition into the shimmer, to which Dr. Ventress (Jennifer Jason Leigh), the icy team leader and psychologist, agrees.  Rounding out the quintet are fiery paramedic Anya (Gina Rodriguez), reserved physicist Josie (Tessa Thompson), and serene anthropologist Cass (Tuva Novotny).  Each of them has their own reasons for volunteering for what is likely a suicide mission, and their backstories are parsed out with skill and subtlety.  There’s not a weak performance in the bunch, but the reliably brilliant Portman and Leigh’s deadpan Ventress are the standouts.

When this five-woman band ventures into the unknown, the movie starts in earnest.  The shimmer’s world is beautiful, deadly, and dreamlike, filled with mutated flora and fauna that are at once familiar and alien.  The alteration and fusion of familiar plant, animal, and human forms make for some thoroughly memorable images; some gorgeous, others terrifying.  Adding to the otherworldliness is the way the shimmer gradually destroys the team’s sense of time, along with blurring their lines between dreams and reality.  Thanks to some skillful editing, Annihilation seamlessly transfers this sense of disorientation and detachment from the heroes to the audience.

Yet despite the hallucinatory visuals and temporal manipulation, Annihilation remains relatively grounded (until its final sequence) because of its efficient, straightforward plot.  For all its psyche-delving detours, it’s still an adventure film; and any seasoned moviegoer will recognize the familiar beats: the team’s dwindling numbers, the heated infighting, and of course, the steady progression towards the mission’s inevitable final destination.  It’s one of the best examples of genre-melding I’ve seen in recent memory, offering both the high-minded pleasures of a psychological drama and the raw thrills of an action-horror flick.  Though it contains a few solid jump-scares, it excels at being quietly disturbing, evoking the same deep chills as a classic episode of The Twilight Zone.

Annihilation’s ending – an extended dialogue-free head trip á la 2001 – deserves special mention.  One of the more impressive (and not coincidentally, original) displays of special effects in recent cinema, it works not because of its beauty but because of its buildup.  It’s a lengthy, borderline-indulgent sequence, but what keeps it from collapsing under its own weight is the fact that it feels earned; thanks to the subtle, restrained approach taken by the rest of the movie.  Like its final ten minutes, Annihilation will prove too opaque for some, but for those craving some variety in their movies, I couldn’t recommend it any higher.